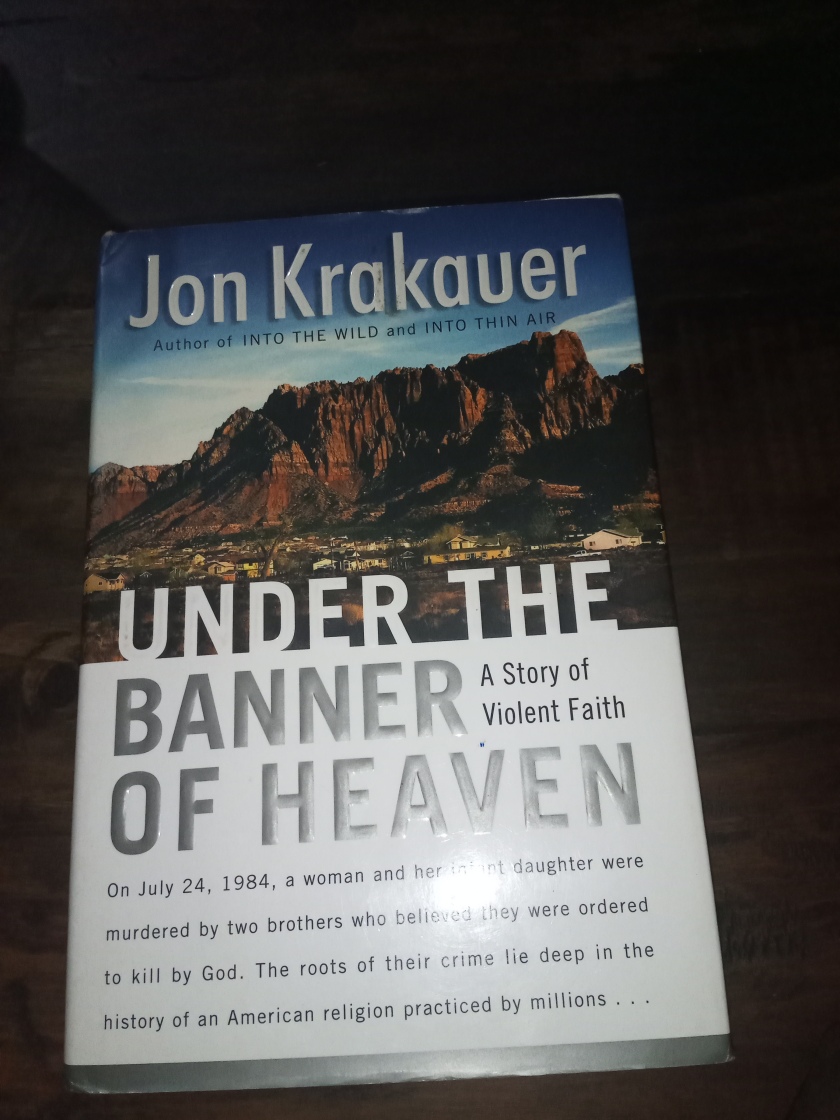 “God is greater than United States and when the government conflicts with heaven we will be ranged under the banner of heaven and against the government.” Taylor, 4th January 1880.

First of all, I was so patient with this book because I wanted to know more of the 1984 murders. Then Jon decided to give a reader a lot of history on the Mormon church. He even made me miss the CNN feature ‘BELIEVE.’

Secondly, am glad he chose this title because ‘History and Brief’ wouldn’t have captured my eyes.

Thirdly, I’ve never seen a Mormon believer in my life probably because am African but I feel so much hatred for them, especially the likes of the Mormon Fundamentalist who raped, had incest with their children, forced children into marriage, practiced homosexuality and other insane practices that had me slapping their beliefs out of their stupid heads. Gross. According to Jon, “relationships are impossible to make sense of without a flow chart.‘

Fourthly, religion has been the opium of the masses for as long as I can remember. I can’t point a finger to these Mormons and judge their faith. To each their own but I feel like they had it all wrong especially these translations from Joseph Smith that went utterly different. So much misinterpretation and false prophesy.

Fifth, it’s such a shame a woman and her child had to die because she chose to fight for the rights of other women. It’s a pity that those close to her who knew of the planned revelation never alerted her. Betrayal. It’s also a shame to see women going through too much torture like domestic violence all in the name of Faith! It hurts to see how much people can blindly be fooled by others and easily swayed to fit in. Imagine not seeking medical assistance, refusal to pay taxes, shunning out the world because everything is EVIL.

Sixth, I know so much about Utah and Colorado States, the former beeen the fraud capital of the world which makes me think they still defraud the government in favour of Mormon Fundamentalists. This is a case study I would love to undertake on their polygamy state, use of Armageddon to control people in the future, ratification of the Equal Rights Amendment which they blocked, their birth rate believed to be higher than Bangladesh, funding and more. For instance: polygamy at the time was illegal (can’t tell if they legalized it) and one would legally marry one wife. The rest were ‘spiritually married.’ Single mothers were recognized in the eyes of the state and qualified for welfare and public assistance thus receiving more than 6M dollars a year in public funds. (The stats continue and it’s insane)

This book opens ones eyes to the damage Faith can lead to. And we continue to see religion doing more harm than good in instances like the Tokyo Sarin gas attack and more so in today’s affairs.

However, I wish Jon concentrated more on the court cases and hearings which were lightly touched on. It’s surprising to see ‘insanity’ ‘not on right mind’ playing defense on the hearings begging the questions of ‘immunize religious fanatics from criminal prosecution.’

It’s also a relief to know Ron died while in prison (2019) awaiting his death sentence. As for Dan he is still alive serving his sentence. Glad that Chloe and Stowe were not killed by the Lafferty brothers on their Blood Atonement mission.

We need so much revelation.